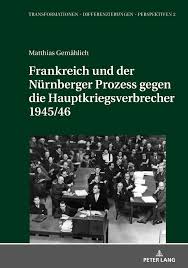 France's importance in the international war crimes trial, which took place between November 1945 and October 1946 in Nuremberg, is an aspect of French post-war history that has so far been largely neglected by research. Not least in France itself, where there is still a great lack of knowledge about the important role the country played in this trial.
Matthias Gemählich closes this knowledge gap with his excellent PhD thesis. Written as part of a cotutelle at the Universities of Mainz and Paris I (Panthéon-Sorbonne), the chronological structure of the work makes it easier for readers to find their way into this legal and complex matter. As the author rightly points out, France played a decisive role in shaping the process and thus made a significant contribution to international humanitarian law. Particularly notable is the approach of the French prosecution authority, which firmly established the victims' perspective during the trial. One reason for this was that the chief prosecutors and their deputies, were former members of the Resistance and had therefore found themselves confronted with the Nazi regime during the German occupation of France.
The author begins by describing how France participated in the Nuremberg main war crimes trial. While still in exile in London, Charles de Gaulle, representing the France Libre, laid the foundation stone for this when he publicly demanded, in January 1942, that the German crimes in the occupied countries should be punished as part of a post-war criminal trial. In doing so he opposed the position initially put forward by Great Britain to execute the high-ranking German officials responsible for the war.
Matthias Gemählich then describes in detail the members of the French delegation in Nuremberg. At its peak France had nearly 250 members and was therefore the second largest group of representatives. The French government recognised the great legal and political significance of the Nuremberg Trial and wanted to be adequately represented on the world political stage, alongside the United States, Great Britain and the Soviet Union. The French government therefore carefully selected its representatives on the basis of two criteria: All prosecutors had to be fully qualified jurists and had to be able to prove that they had actively engaged in the Resistance. Together they stood for the ‘France of the Resistance’, which brought charges in Nuremberg.
The first French chief prosecutor was François de Menthon. Born in 1900, he was a close confidant of de Gaulle and minister of justice in his provisional government between September 1944 and May 1945. He was also co-founder of the Catholic-conservative resistance group Liberté. In July 1943 he escaped to London and joined de Gaulle. Before he was called to Nuremberg, he had set up special courts in France against collaborators. However, François de Menthon’s concerns were for French domestic policy and at the beginning of January 1946 he only made the opening plea at the trial and then resigned the position.
His successor was Auguste Champetier de Ribes. He was almost 20 years his senior and was also a jurist, but, unlike his predecessor, de Ribes belonged to the generation that had participated in the First World War. In 1940, he was one of the few members of the French parliament to vote against the transfer of unrestricted government power to Pétain. As a member of the Combat resistance movement, which also belonged to the conservative political camp, he had been interned in France for two years. From January 1946, he assumed the position of chief prosecutor in Nuremberg. However, he was more of a spectator than a participant because he was not familiar with the matter and was also physically unwell. For this reason, he was often unable to attend the trials and in the end delivered only the prosecution’s closing speech, at the end of August 1946.

As the two chief prosecutors did not want, or could not, fully participate in the prosecution, Charles Dubost became the first deputy of the prosecution and the main pillar of the French prosecution, ensuring its professional, and personal, competence and continuity. Born in 1905, the lawyer had already made a name for himself as a judge and public prosecutor during the interwar period. Like the other two chief prosecutors, he also belonged to the French Resistance and had already made a name for himself as a prosecutor at the special courts against collaborators in France. Appointed to the French prosecution in September 1945, he devoted himself exclusively to his new task. The brilliant jurist however, was regarded as not being a very sociable person by his American and British colleagues. He was also known by them - albeit wrongly - as a committed communist. More difficult than the personal animosities, however, were the different legal opinions. While France regarded the conduct of a war of aggression by the Nazi leaders as a political matter that did not affect the planned trial, the American chief prosecutor Robert H. Jackson took exactly the opposite position. France, reluctantly endorsed that. In contrast to the British position, France advocated the collective guilt thesis from the very beginning.
It was Aline Chalufour, the only female jurist of the French prosecution, who successfully bridged the personal and legal divides. Not only did she speak perfect English, but was also very familiar with the peculiarities of the American and British criminal court system. Born in 1899, she first studied English in Paris before attending the École libre des Sciences Politiques, where she completed her studies with a PhD in law. As a woman at that time in France she had no access to the post of judge or prosecutor, so she went to the USA and Canada and worked on specialised publications there. From 1942 to 1944 she worked in Ottawa for the France Libre and in June 1944, François de Menthon recruited her for the Ministry of Justice.
During the trial the French prosecution concentrated on war crimes and crimes against humanity, committed in Western and Northern Europe. France thereby also represented the Benelux countries as well as Denmark and Norway on the international scene.
The French had four thematic focuses: atrocities against civilians, crimes against prisoners of war, forced labour and economic pillaging of the occupied countries, as well as the attempted ‘Germanization’ of European nations. In particular, the French Prosecutor's Office emphasises the evidence from the perspective of the victims, which set him apart from the other prosecutors. The other prosecutors based their evidence almost exclusively on captured German documents. French prosecutors also called survivors of the concentration camps to the witness stand in order that the victims' perspective be represented. It was mainly the evidence gathered by the French prosecuting authority, on which the judges based their death sentences against Joachim v. Ribbentrop, Alfred Rosenberg, Robert Sauckel and Arthur Seyß-Inquart.
The proceedings were somewhat dull and France was third in line to present their charges, after the USA and Great Britain. Almost three months after the start of the trial the French public rejected it. They believed the Americans were driving the trial and that France was allowed no room for autonomy. The French press was decisive in supporting this distorted view, although the French journalists present on the scene were aware of the complexity of the trial with four official languages, 22 defendants, four chief prosecutors and eight judges. They also understood that the rights of the defence should not be restricted, in order to prevent the Allies from being discredited by any kind of victor's justice.
When the sentences were announced and death sentences were not handed down in all cases, a storm of indignation broke out in France. Not only the numerous and politically very influential deportee associations, but also the left-wing press saw in the trial the "shame of Nuremberg" and a mockery of the victims. Both were wrong, as Matthias Gemählich impressively points out in his work. Despite his discontinuity of staff at the head of its prosecution authority, France led pioneering work in international law within the Nuremberg Trial. It should be remembered that the majority of the evidence was given by the victims and that the defendants were thereby confronted with the victims' suffering. France thus played an active part in the trial of the main war criminals and made significant independent contributions. "This contribution deserves to be remembered by posterity. (p. 353)“

The reviewer can only agree with this conclusion. However, she would have liked a more detailed account of the history of the reception of the trial and of how far this history, as well as the entire historiography of the années noires, was marked by the representatives, the deportees and members associations of the Resistance.
With his PhD thesis, Matthias Gemählich succeeds in presenting an extremely differentiated presentation of France's role during the Nuremberg main war crimes trial.
A pioneering work.