My loved ones at home
Letters from Gertrud Woltmann, Paris 1940-1944
Gertrud Woltmann was the daughter of a pastor from Twistringen, in northern Germany. In 1940, when she had just turned 20, she was transferred to Paris to work as an army auxiliary and was stationed there until 1944. She wrote regularly to her parents and began all her letters with My loved ones at home.

In a lively and often humorous style she wrote extensively about her everyday life in Paris, describes performances she had seen at the theatre and tells her parents about some of work she did for the German army.
She remained a devout Christian and wrote much about her engagement with the German Protestant community and her involvement with the choir.  It becomes clear that she did not support the war and her letters show how her unwavering faith helped her cope with the cruelty imposed by the Nazi regime.

This collection of her original and unedited letters, together with some of her personal photographs and an interview she gave in 2017, offer a detailed insight into her private life and give an intimate perspective on the life of a young woman, forced to live far from home, during an extraordinary time. 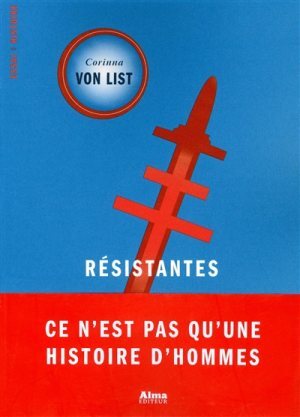 This thesis focuses on the role women played in the French Resistance and illustrates the level of commitment they had to overthrowing the Nazi occupation.
The women generally did not take up arms, but they risked their lives in many other ways and their activities had a significant contribution to the allied victory of 1945.
They were secretaries, teachers, social workers, journalists and housewives and they all became Resistance fighters. These normal women, from normal backgrounds, became radio operators, liaison officers, distributors of underground, clandestine papers and organisers of escape lines.
Corinna von List offers a meticulous investigation, which is supported by personal testimonies and previously unpublished archive documentation. She demonstrates that the beginnings of the French Resistance were not from the military, but in the civil arena. The Resistance developed from the dedication and commitment of the French population, notably the women, who resisted the Nazi occupation and were determined to liberate France.

The Marie-Claire and Marie-Odile escape lines
Two women, two lines and two stories, but only one has, so far, been told.
(Francia 43: 2016, in German)

The Marie-Odile escape line and its founder Gabrielle Barré de Saint-Venant, has been entirely overshadowed by the English woman Mary Lindell and her Marie-Claire line. One reason for this oversight is possibly because Gabrielle Barré de Saint-Venant did not survive her time in the notorious Ravensbrück concentration camp, she did not leave a written record of her achievements and was never able to tell her story.
Mary Lindell was a British MI9 agent. She lived in Paris with the French count Maurice de Milleville and assumed the title of Comtesse de Milleville. When Germany invaded France she initiated and developed the Marie-Clare escape line and is considered to have been an outstanding British resistance fighter.
She was eventually arrested and sent to Ravensbrück, but unlike so many other woman, Mary Lindell survived the camp. She was a well-educated and highly articulate woman and she spoke publicly about her experiences long after the end of the war, but it turns out that her biography is only half true.
From records recently uncovered in the French, American and Swiss archives we can now say that much of what Mary Lindell said about herself and her escape line were fabricated and that she often claimed the achievements of Gabrielle Barré de Saint-Venant as her own.
This article analyses Gabrielle Barré de Saint-Venant's activities for the resistance, it  highlights her significant contribution and the extreme risks she ran in helping men escape France during the Nazi occupation.
available online
Anrath Prison
Women suspected of engaging in resistance activities were taken to Anrath prison, in the Rhineland. Very few people knew about its existence and virtually nothing has been written about this Women’s Detention Centre, but a recent search through the British military justice records, at Kew, brought the horrors of Anrath to light.
The Deportation of Women discusses the deportees and examines the conditions that women faced in this Nazi camp.
Published by Presse universitaire de Paris Nanterre, 2019.
available online

The collection of German court documents
with Gaël Eismann
Records of the German courts from 1940-1945 are held at the BAVCC, in Caen. They provide us with new sources and new tools and help to write an accurate account of German judicial repression during the Second World War.
Francia 39 (2012)
available online